This week, at least for now, The Stock Market is “winning the war,” but there are some short-term “battles” coming up in the next couple months in order to keep it that way.

Normally “Nerdvember” is a month for me to “nerd out” with charts, tables, and graphs, but to do so in a manner that is educational. My original plan was to focus on four different “themes” for each of the four weeks this month, but with the stock market acting as erratic as it has this year, I’m putting this structured, regimented concept on the back burner until next year, when things are hopefully a lot less crazier.

So, for our second installment of Nerdvember, we’re going to stick to current events and my thoughts on the market right now.

Below is a short-term look at the S&P500 (solid line). What you’re looking at is a dotted line, which represents the 21-day exponential moving average (or “21EMA” …or just throw out the jargon and call it a 21-day trendline).

The two, solid lines on both the top and bottom of the dotted line are 3% bands. To clarify, the one on top is +3% above the dotted 21EMA, and the one on the bottom is -3% below the 21EMA.

The reason I use these 3% bands is because the market has a tendency to “bounce” above and below them for short periods of time before reverting to the mean. When the market is in an uptrend, we’ll observe price (the market) butting up against or slightly exceeding the +3% band on occasion, pulling back, and then making another charge higher. Instead, what we’ve been observing is the S&P500 making “round trips” above and below both the upper and lower bands, which suggests we’re in an environment of “indecision.”

What I find especially interesting this week is that the lower band in the chart above currently sits right around 340 on the S&P500 ETF (NYSEARCA:SPY), and as I was flipping through all my indicators and charts, I noticed that the 50-day moving average (“50MA,” or again, think “50-day trendline” here) sits roughly at the same level, below.

The 50MA is the line with the shaded area in blue. When the market or any investment is below that level, I like to call it “under water.” The S&P500 has been under water twice in the last two months and is currently trying to break out of this pinball game of indecision.

Best case scenario, it stays above the upper, dashed horizontal line, which represents the September and October highs (marked with red arrows). If it fails to stay above this line in the sand, there is a chance we could see a quick move downward. There is a saying in technical analysis that goes, “From failed moves in one direction, come fast moves in the opposite direction.”

Next-best scenario, I’d like to see it remain above its 50MA, but worst case, I’d want to see the market remain above the bottom, dashed horizontal line, which represents a potential “floor” of support below its feet, marked by the June highs, August support, as well as the September and November lows (also, all marked with red arrows).

A failure to hold above the upper horizontally-marked level of support/resistance (above) would result in a “bull trap,” and could result in a pretty quick move downward, so caution is warranted here.

Enough with the nerdy charts… let’s talk about current events.

In the long-term, I’m still feeling pretty good about the direction of the market for the following reasons:

In the short-term, however, I think the market has some near-term battles to win before we can safely assume it’s winning the war.

First, we have the least-probable concern – the U.S. Presidential Election battle. While it’s still entirely possible that the election could flip (all eyes are on Pennsylvania at the moment), I think it’s unlikely. That being said, if the results of the election do change, I believe that could cause some pretty serious civil unrest, which could surely work its way into the fabric of the stock market.

Secondly, and much more probable (if not absolutely certain) is the fact that Coronavirus cases and hospitalizations are shooting through the roof. There seems to be a bigger lag than previously expected, as well. When someone shows symptoms of the virus, it could’ve been incubating for as much as 5 days. However, once they decide to get tested, unless you receive a Rapid Test (which isn’t as accurate), many testing sites aren’t providing results for another 4-5 business (not calendar) days later.

The stock market seems to keep shrugging off these higher numbers in favor of vaccine news, but it still remains a short-term concern in my book… at least until we start to get past the peak of the winter months and of course, once we see whether or not all the new quarantines and curfews have worked. 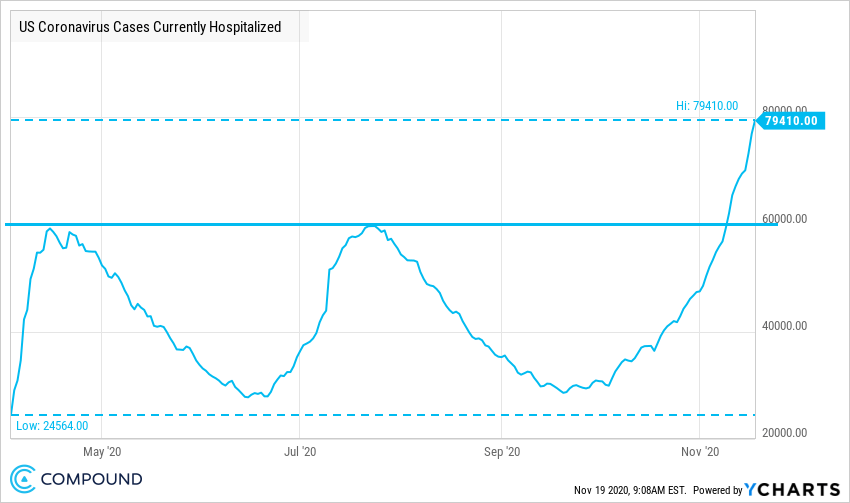 That brings me to my biggest, and most probable concern – curfews, city and statewide shut-downs.

I recently tweeted that the New York Society of CPAs reported back on October 27th that, by year end, renters will owe $7.2 billion in past-due rent. If there is no new stimulus deal passed by then, it’s estimated that this number could grow to as much as $70 billion, with 12.8 million Americans owing an average of $5,400 in missed payments.

Compound all that with the fact that there are still millions of people unemployed, and a U.S. government that can’t seem to come to an agreement to help these struggling individuals and business owners during the holidays.

In closing, it could be a volatile 10 weeks or so, at least until we’re hitting peak flu season, the election madness is behind us, and we have more clarity on stimulus. Barring any unforeseen negative catalysts aside from these above-mentioned battles, I believe the U.S. stock market will prevail in the long-term, bringing the economy along with it.

Editor’s Note: The summary bullets for this article were chosen by Seeking Alpha editors.