You’ve no doubt heard of the so-called snowball effect. And it was probably in a negative context, which makes sense considering the visual that accompanies its definition.

Imagine that you’re at the very top of a snowy mountain with a friend. You’re having a good-natured snowball fight near one particularly steep slope. Sure, there’s danger in doing so, but hey, you’re not the one closest to it.

If someone’s going down, it’s going to be your friend. You’re yards and yards away. Therefore, you’ve got plenty of room to dance around avoiding projectiles and scooping up more fluffy white stuff to form your own.

Of course, that dual focus on offense and defense alike does mean your aim isn’t so steady. And so one of those snowballs overshoots its mark (which, incidentally, is also bobbing and weaving).

Sailing past your friend’s head, it falls to the steep slope at the right angle and with the right momentum. And so it doesn’t stop there.

Not only does it not stop, but it keeps picking up more snow as it speeds down the mountain, quickly going from a mere handful to something the dimension of a good-sized grapefruit.

Then a bowling ball.

Then a disco ball.

The further it rolls, the bigger it gets until it’s one massive unstoppable force. And heaven help anyone or almost anything that gets in its way. 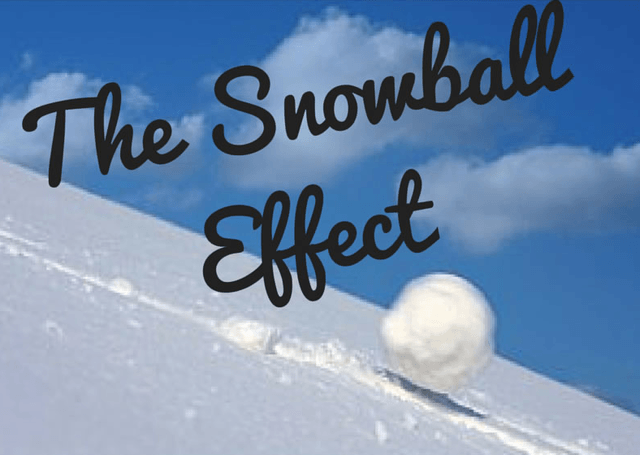 Again, the snowball effect is a well-known concept to the point where Wikipedia has a page devoted to the topic.

Being a professional though, I’ll skip that and go to Merriam-Webster Dictionary’s site for our official definition instead. It reads, “A situation in which one action or event causes many other similar actions or events.”

Funny enough though, it offers a positive example to boost people’s understanding: “The city hopes that these improvements will have a snowball effect and spur private investments in the community.”

Being the Merriam-Webster Dictionary, it’s easy to assume it knows what it’s talking about when it comes to words and compound nouns. But even if you don’t see it as a trustworthy source, how about this example for you…

Imagine that you’re not at the top of that mountain. A company is in that space, while you’re standing at the bottom.

Also imagine that it’s not snow up there. It’s cash. And the company isn’t trying to hit anything with the crisp green bills (that somehow are still mashing together like snow) it’s reaching down to grab. It’s deliberately aiming for the slope so that the money just keeps collecting more and more money as it goes.

In the first scenario, the further up the slope you are, the safer you’ll be. If you have to encounter that snowball, you want it to be at its smallest stage.

In the second though, the further down you are, the more money comes rolling right to you. Naturally then, you want to be at the very bottom, waiting to catch it.

Or at least you want to be beside a cliff wall to end its momentum, allowing you to access that enormous collection of cash.

A Slow but Steady Snowball Worth Waiting For

When it comes to timelines, that alternative “snowball” scenario isn’t at all applicable to dividend reinvesting – which is what this article is about, of course.

A rolling ball of white sticky stuff can travel quite quickly depending on the conditions. Taking advantage of a dividend reinvestment plan, however, takes years and years, even decades and decades.

The payouts you put back into the payout-providing stock only buy up so much more of it. At first…

Yet that brings up my second point. Because, when it comes to timelines, that alternative “snowball” scenario is spot on. The longer it’s left to roll, the bigger it’s going to become.

Make no mistake: There are big potential benefits to investing long term in a company that regularly increases its dividend. The more time you hold your shares, the higher the yield you’ll receive on your original investment.

(This assumes dividends increase over time, of course. So be looking for that kind of growth too.) 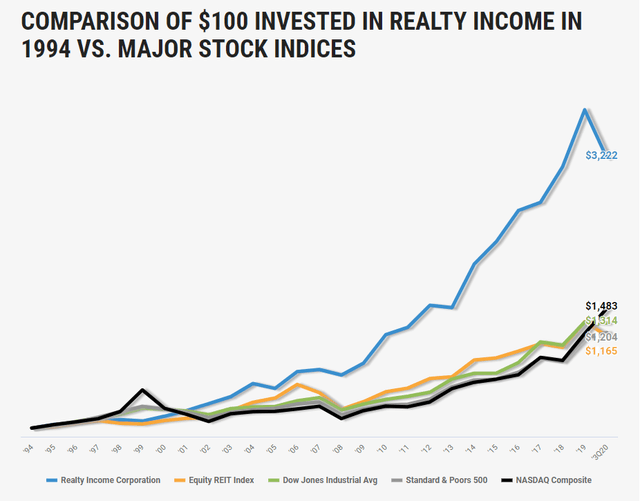 That’s the kind of snowball effect I like to see. And I imagine you’re pretty OK with it too.

“One way to become a shareholder is to buy shares through our direct stock purchase and dividend reinvestment plan (DRIP) administered by Computershare. This is a cost-effective way for investors to purchase shares of our common stock.

“Shareholders can also increase the number of shares they own by reinvesting their dividends through the plan. We pay all of the investment fees associated with the plan. The minimum initial investment is $1,500 (or $100/month if enrolling in continuous monthly purchases) for all new accounts set up through Computershare.”

It goes on from there, but I think you get my point about the beauty of snow by now…

Of course, the only way that snowball can keep rolling is if Realty Income – or whichever dividend-paying company you’re looking at – can deliver on its promise of paying and increasing its dividends.

That’s one of the primary reasons I continue to preach about the quality of the underlying earnings stream (or adjusted funds from operations) that grows the dividend.

Consider Realty Income’s track record of favorable returns to shareholder since its IPO in 1994. Then compare that to these benchmark indices: 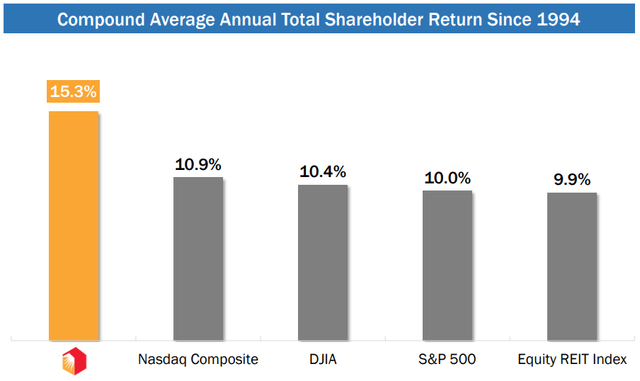 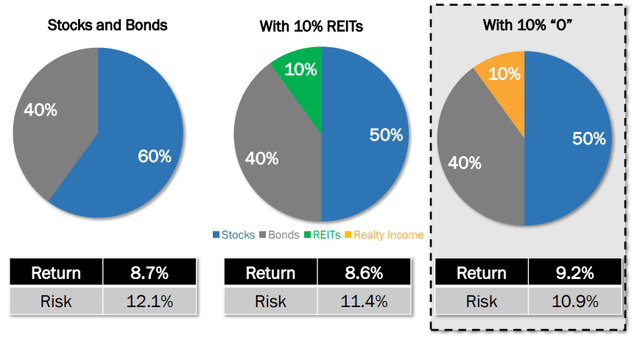 Now back to dividends, since those are so critical to the snowball effect. In a low-growth, low-yield environment, consistent dividend growth generates significant value for investors, As viewed below, 83% of Realty Income’s returns (from 1994 through Q3-20) were attributed to dividends: 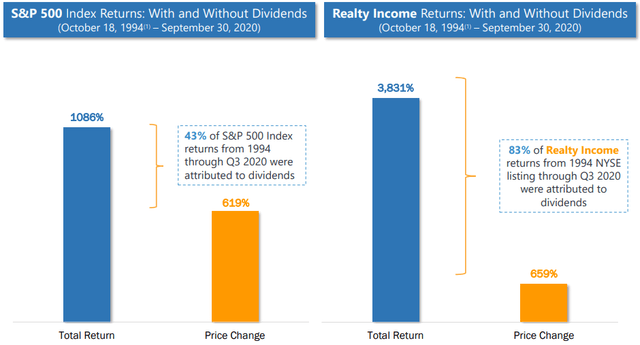 That, my friends, is a pretty perfect example of the magic of sleeping well at night (SWANning). Those dependable dividends grow over time with a steady dividend record supported by a stable near-pandemic-proof business model. 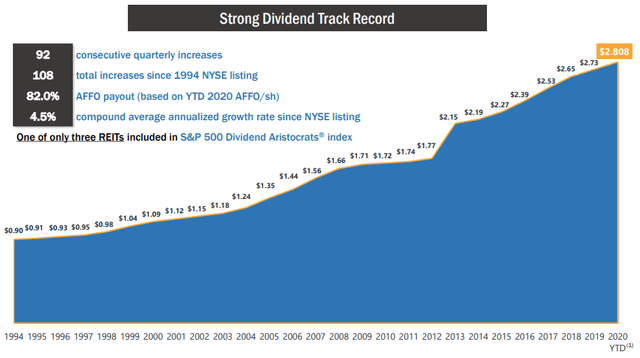 The Price of Admission

As I ponder the current valuation of Realty Income, I’m reminded of a few things:

On the surface, yes, 18% exposure to higher-risk properties in the midst of a pandemic is alarming.

However, the likelihood of a vaccine being distributed soon is almost as predictable as Realty Income’s monthly dividend. In other words, it’s no longer a matter of “if” but “when” that solution will arrive.

And that is the primary catalyst for shares to move higher. 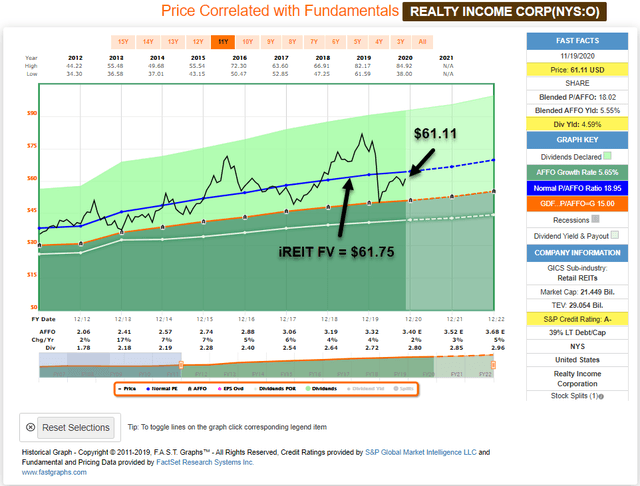 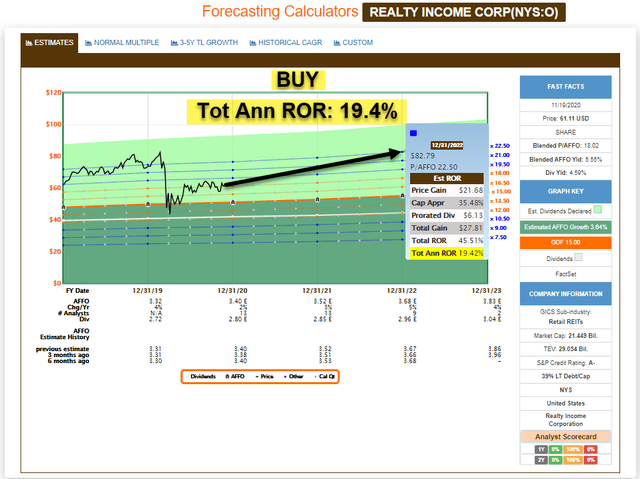 With this buy rating, we believe that Realty Income shareholders will continue to get a steady monthly dividend payment, with annual increases, along with price appreciation of 10% (5% growth and 5% multiple expansion).

I used Realty Income as a textbook example of the snowball effect, so I also could showcase my largest stock position. Since September 2014, shares (in O) have returned an average of 19.2% (vs. 6.4% for the VNQ).

I know I write about Realty Income often enough. So you might very well be sick of the topic.

Year to date, I’ve written about it well over 12 times. Perhaps even as much as twice a month between so-called listicles and one-REIT “free-standing” articles like this one.

For instance, on Oct. 4, I included it in “The Key to Just-About-Assured Pandemic Profits (and It’s Not ETFs).” There, I noted that:

“If there’s one common denominator for the best-prepared REITs for this pandemic, it really does seem to be diversification.”

“Realty Income… is one of the most diversified REITs available, owning 6,541 properties in 49 states and the U.K… Exposure to 50 industries enhances predictability of cash flow. Plus, a solid 96% of its portfolio is defensive-focused, protected against retail e-commerce threats and economic downturns. (Think convenience, drug, dollar, and grocery stores.)”

I call that a very promising slope for a dividend “snowball” to fall onto. Combined with management’s so-far amazing aim, I’m more than happy to stand at the bottom of this particular hill waiting to see how big my dividends will get.

And, hey, if I can share the wealth along the way by telling others to get involved too… then I’m going to do exactly that.

Author’s note: Brad Thomas is a Wall Street writer, which means he’s not always right with his predictions or recommendations. Since that also applies to his grammar, please excuse any typos you may find. Also, this article is free: Written and distributed only to assist in research while providing a forum for second-level thinking.

At iREIT, we’re committed to assisting investors navigate the REIT sector. As part of this commitment, we recently launched our newest quality scoring tool called iREIT IQ. This automated model can be used for comparing the “moats” for over 150 equity REITs and screening based upon all traditional valuation metrics.

Join iREIT NOW and get 20% off and get Brad’s book for FREE! 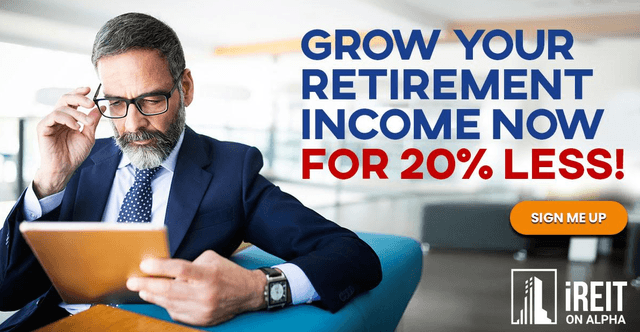 Disclosure: I am/we are long O. I wrote this article myself, and it expresses my own opinions. I am not receiving compensation for it (other than from Seeking Alpha). I have no business relationship with any company whose stock is mentioned in this article.