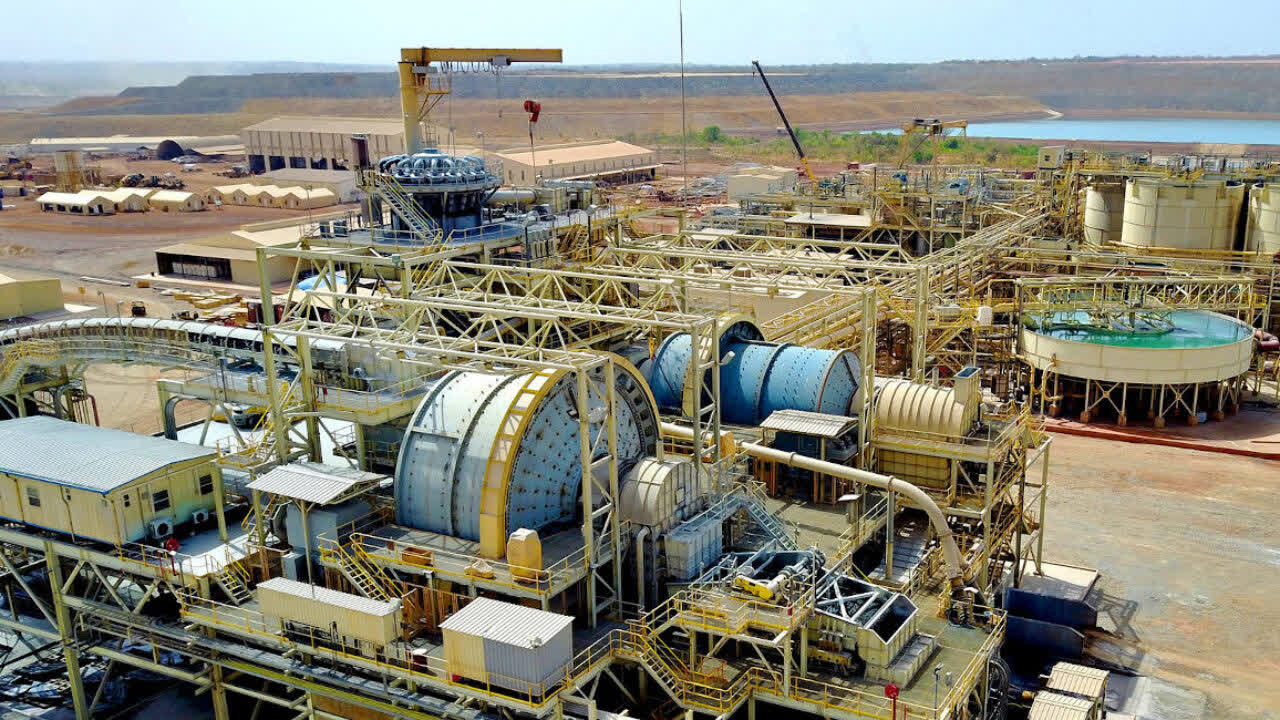 BTG announced third-quarter 2020 adjusted earnings per share of $0.15 per share. The results were in line with analysts’ expectations. The company’s financial profile is now imposing, with long-term debt nearly gone.

The only concern remaining that could be a problem down the road is the assets’ location, especially the Fekola mine in Mali, the main mine for the company with 57.8% of the total output produced there as of 3Q’20. On August 19, 2020, the company announced that:

Note: Mabaste mine in the Philippines had to shut down for six days after a strong earthquake occurred on August 18, 2020.

B2Gold outperformed the VanEck Vectors Gold Miners ETF (NYSEARCA: GDX) by a large margin. If we look at the chart below, BTG increased at a double-digit rate and is now up 49.38% since January 2020, despite some recent weakness.

The investment thesis is more complicated now for BTG and the gold industry in general.

The company is an excellent gold producer and should deserve an investor’s long-term attention. However, with a gold price showing some signs of fatigue lately and a potential retest of $1,750 per ounce midterm, we should be extra careful and protect the profit made either by using options or take some profit off the table.

Valuation is now a problem because it is directly tied to the gold price. If the gold price turns bearish, I would argue that B2Gold may be considered overvalued and can correct significantly.

“Another very strong quarter, putting us on target to the lower end of our guidance for 2020 for the year.”

Operating cash flow was a record $300.8 million for the third quarter of 2020 compared with the $167.8 million in the prior-year quarter.

B2Gold’s board pays a quarterly dividend of $0.04 per share or a yield of 2.82%. CFO Mike Cinnamond said in the conference call:

“We’re paying dividends right now at the rate of $0.04 per share quarterly that would be $0.16 annualized U.S., which equates about $170 million a year. That’s the yield right now about 2.4%, which I think puts us right up near the top of the dividend paying gold companies.”

The company has reduced its long-term debt to nearly nothing and is now net debt-free. It has been a priority from management, and they delivered. The debt profile is a big plus from a long-term perspective.

“In the quarter, we paid that down $425 million, which was the total outstanding now on our revolver. So we have no amount drawn under the revolver. We just have a little bit of debt under the finance leases related to mainly to Fekola, about $50 million, but other than that there’s no other debt. And what we have left on the revolver is $600 million undrawn capacity plus another $200 million accordion so we really have $800 million of firepower [ph] there where the revolver as it stands.”

Below is the detail per mine from Q2 to Q3.

The company reported consolidated cash operating costs of $411 per ounce in the third quarter, down 7% from the same quarter last year.

Gold production from the Fekola, Masbate, and Calibre was better than expected. Only Otjikoto mine performed less sequentially.

B2Gold is a solid gold miner with a pristine balance sheet and good growth potential. A price of gold above $1,900 per ounce this quarter helped the bottom line tremendously.

However, this quarter’s most important element is the price of gold starting to show some signs of fatigue after reaching a record at $2,070 per ounce on August 9, 2020.

Again, if we look at the 10-year chart and adjust for inflation, we can see a perfect cup & handle forming. We are now in the handle part with a potential retracement that I estimate at about 15%, representing $1,750 per ounce.

Thus, you must be prepared to trade more frequently and assume a lower high trend situation. 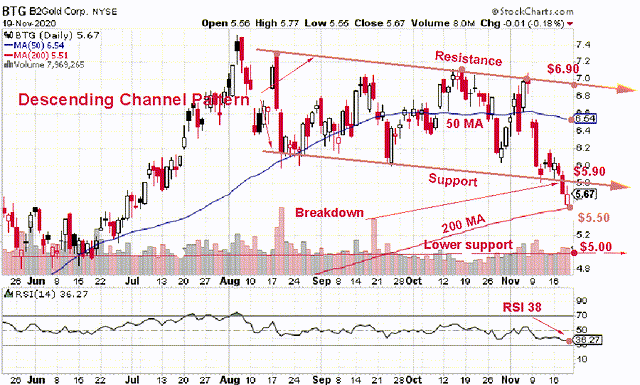 BTG formed a descending channel pattern with resistance at $6.90 and support at $5.90. A few days ago, the stock experienced a breakdown and reached the secondary support at $5.67 (200 MA).

The first conclusion is that the old support is now a resistance at $5.90, and we could eventually imagine a new pattern in progress called a descending triangle with new low support at $5.00.

The trading strategy now is to accumulate slowly with a potential retest of the $5 support (hoping it holds). I recommend selling now at or above $5.90.

Assuming that the gold price continues to weaken and trade in the $1,750 area, we may eventually go lower, potentially below $4.50. At this point, it would be an excellent opportunity to add again.

Author’s note: If you find value in this article and would like to encourage such continued efforts, please click the “Like” button below as a vote of support. Thanks!

Join my “Gold and Oil Corner” today, and discuss ideas and strategies freely in my private chat room. Click here to subscribe now.

You will have access to 57+ stocks at your fingertips with my exclusive Fun Trading’s stock tracker. Do not be alone and enjoy an honest exchange with a veteran trader with more than thirty years of experience.

“It’s not only moving that creates new starting points. Sometimes all it takes is a subtle shift in perspective,” Kristin Armstrong.

Fun Trading has been writing since 2014, and you will have total access to his 1,988 articles and counting.

Disclosure: I/we have no positions in any stocks mentioned, and no plans to initiate any positions within the next 72 hours. I wrote this article myself, and it expresses my own opinions. I am not receiving compensation for it (other than from Seeking Alpha). I have no business relationship with any company whose stock is mentioned in this article.

Additional disclosure: I trade short term BTG, but I do not have a long term position at the moment.