After a brief spike up in the share price in early October on the back of an upgrade in guidance from a previous downward revision, Alteryx (AYX) once again finds itself down in the dumps, with a decline in the share price to near $115 per share after recent earnings. While the market reaction was swift and decisive, there were actually a number of positives coming out of the report. Even though Alteryx was not one of the businesses I recently ‘panic bought’ during the technology pullback, I continue to believe that Alteryx may be well positioned for strong acceleration and share price recovery at the conclusion of the pandemic

Most of the concern associated with Alteryx’s result was guidance provided for Q4 revenue as well as a more modest outlook for 2021. While Alteryx delivered 25% revenue growth in Q3, its Q4 implies a 4% to 7% year-over-year decline. On the earnings conference call, Alteryx also indicated that revenue for 2021 would actually be below revenue in 2020, which at its surface also seems a little concerning. 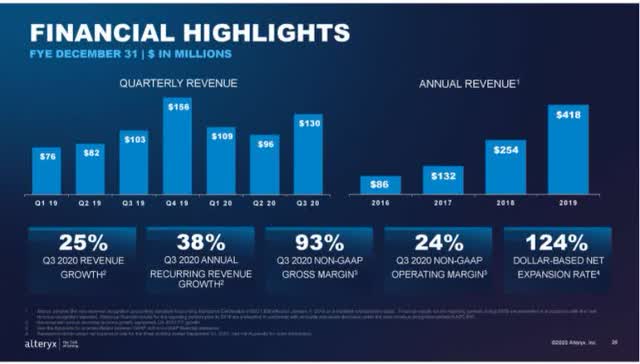 However, diving deeper into the Alteryx result reveals that much of this is a pandemic related peculiarity. With Alteryx writing a significant volume of short-term six-month adoption licenses, compared to longer-term multi-year deals, initial contract sizes and potential renewals will be smaller in the near term. Given Alteryx recognizes nearly 30% of total contract value as revenue upfront, shorter-term contracts are making it difficult to exceed strong comparisons pre-pandemic where budgets were freer and deals were longer in length.

Interesting color was provided by the Alteryx management team who suggested that Annual Recurring Revenue, or ARR, which is a better representation of the longer-term health of the business would actually be up over 30% in 2021, indicative of the fact that Alteryx management expects a strong percentage of adoption licenses and short-term contracts to be renewed and extended as the pandemic eventually resolves itself.

Alteryx goes to some lengths to claim that the data preparation problem which it solves for is a large one, with $60B in wasted hours across enterprises attempting to solve for manual, repetitive work in excel preparing data for analysis. 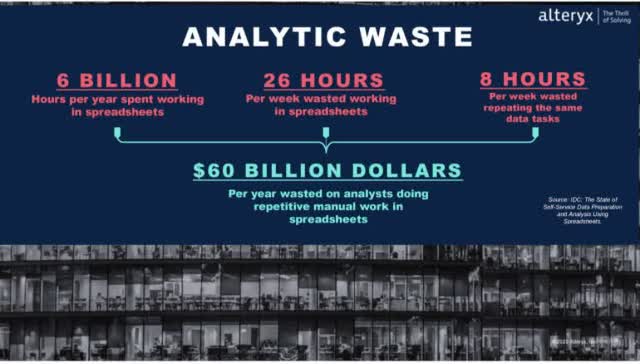 Given Alteryx’s weak guidance, one could be forgiven for thinking that the problem which Alteryx solves for is no longer important and that the pandemic has somehow brought to a standstill the need for data preparation as part of the digital transformation process.

Yet data presented by Alteryx suggests that this couldn’t be further from the truth. Alteryx’s existing customers continue to be retained and continue to spend up on the product. However, it’s clear that there is a tale of two segments.

While Alteryx’s dollar based expansion rate has been trending down over the year and finished the most recent quarter up only 124%, the Global 2000 customers of Alteryx continue to increase spend rather robustly on Alteryx’s product with a dollar base expansion of 135%, largely consistent with the rate of expansion in that segment in recent quarters. 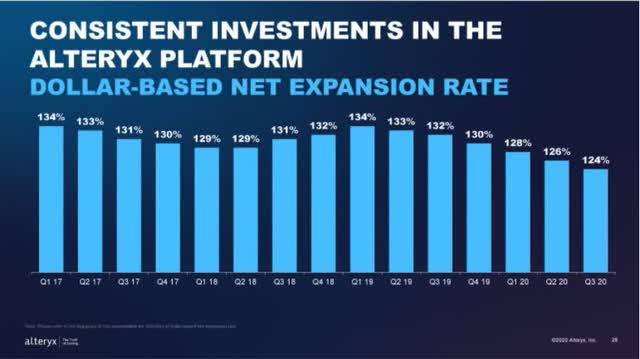 It’s really in the SMB and mid-market segments where Alteryx has been struggling with account expansion and retention. The takeaway for me here is that for those companies that have the budgets and have been able to sail through the pandemic relatively unaffected, Alteryx is still viewed as mission critical and the best way for them to tackle the data tsunami as evidenced by the quite healthy expansion of revenue in these accounts.

However, for the mid-market segment whose priorities may have shifted as a result of tighter budgets and a reallocation of priorities, it’s just a reality that data preparation for digital transformation just hasn’t risen to the top of that list. They are either making do, or deploying smaller projects.

Yet, there’s little question that the customer need still exists. In spite of broader market difficulties, Alteryx still managed to increase new customer accounts 24% year over year in the quarter, which I view as a very good proxy for the extent of the underlying market need.

Also notable was the strong interest from customers internationally, with Alteryx seeing international growth at over 70% year over year in the most recent quarter, albeit of a smaller base.

Alteryx’s recent earnings call provided the first opportunity for new CEO Mark Anderson to provide some color on his new vision for Alteryx moving forward. I think his messaging was very interesting and his approach will orient Alteryx more towards being a strategic partner for digital transformation in larger accounts and getting more of that pie, versus a focus on more smaller deals from smaller customers and driving value primarily through the data analyst. It marks a shift in approach in decision maker focus and opportunity focus.

Anderson provided commentary on the analyst call suggesting a shift to orienting the sales organization around key strategic accounts and helping these accounts solve business transformation. Specifically, those customers and verticals that are likely to have the highest need for the type of innovation that Alteryx provides. Finance and healthcare were two in particular that were specifically called out. This is likely to not only help position Alteryx better versus open source, more complex alternatives such as Python which require coding or Microsoft excel, but also assist Alteryx to win larger deals upfront and accelerate the land and expand motion.

One of the knocks on Alteryx has been that its solution has been largely structured around on premises deployment and that the company hasn’t been proactive in making a shift to the cloud to support cloud-based data analytics and data preparation. Alteryx has always been consistently clear that the company will be where the market is moving, and if customer demand for Alteryx’s tools are more cloud focused, they would proactively support that. In fact, Dean Stoecker, co-founder and chairman of Alteryx, has suggested in the past that Alteryx can support cloud-based implementations by providing the software within a cloud hosted instance in Microsoft Azure or AWS if a customer requires it.

In what seems to be a shift in emphasis from its previous stance on this topic, Alteryx’s new management has alluded to a more cloud focused and possibly even cloud first approach and tighter integration into Azure and AWS and cloud focused data warehousing providers such a Snowflake (SNOW). It seems that Alteryx’s customers are making the journey in this direction and are asking Alteryx to move with them.

Potential risks to the pandemic recovery case is that Alteryx successfully conditions its customers to shorter-term adoption licenses which delay expansion into larger deals. From a product perspective, a delay in Alteryx embracing a cloud first product strategy may prompt some of its larger more progressive customers to consider other alternatives.

Alteryx has sold down heavily after this most recent earnings announcement, with the stock dropping nearly 20%. The business currently trades at the lowest price to sales ratio that it has seen in the last few years. What is clear, however, is that larger customers for whom digital transformation is a priority are still seeing the value of Alteryx’s tools and are expanding their use throughout their enterprise.

Alteryx is also not having any trouble convincing new businesses that they have a product that solves a particular need. The business also isn’t sitting still and is aggressively continuing down the path of product innovation. At this juncture, I view Alteryx as a pandemic recovery stock which is likely to benefit upon normalization of economic conditions amongst midsize businesses that will soon be more comfortable in signing higher value, longer-term deals which will eventually propel Alteryx’s stock higher.

If you are interested in uncovering other sustainable high growth prospects please consider a Free Trial of Sustainable Growth.

Disclosure: I am/we are long AYX. I wrote this article myself, and it expresses my own opinions. I am not receiving compensation for it (other than from Seeking Alpha). I have no business relationship with any company whose stock is mentioned in this article.